1. An interior witness acts as an impartial judge of our shifting fortunes, tracking our wins and losses. No matter what we have to show for ourselves, regardless of the evidence in our defense, questions remain, doubts persist, our Kafkaesque trial grinds on. Even in the event of acquittal, the feeling that we’ve fooled the jury creeps in. An unambiguous outcome in our favor is not an option. As Czech president Vaclav Havel noted, “The higher I am, the stronger my suspicion that there has been some mistake.” We can lose, but we can’t win. 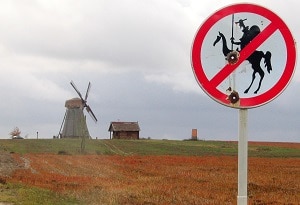 2. As individuals, our point of view is inseparable from our personal history. Our sight is necessarily partial, our beliefs, unavoidably partisan. Unaware of what can’t be seen from the ground we stand on, winning is by accident, losing, the rule.

3. When we think we’ve won, Nature moves the goal posts. You win the game only to discover that you’re behind the eight ball in a new one. Explanation is never complete; new and better answers invariably present new and deeper questions. Return to go.

4. Dreams shatter on the rocks of reality; imagination runs aground on the shoals of practicality. Think of Don Quixote: If ever there was an impossible dreamer it was the Man from La Mancha.

In his quest for immortal fame, Don Quixote suffered repeated defeats. Because he obstinately refused to adjust ‘the hugeness of his desire’ to ‘the smallness of reality,’ he was doomed to perpetual failure. (Simon Leys after Miguel de Unamuno)

Our achievements pale beside the dreams that inspire them. When at last the Don realized that his dream was impossible, he returned home, put down his lance, and died.

5. We desire the eternal, but are bound in time. Death exempts no one; extinction annuls whole species, and likely won’t cut human beings any slack.

6. The heart, formerly the seat of the soul, is now seen as a pump made of muscle. The same unsentimental methodology is applicable to the brain. Not only will humans figure out how it works, they’ll build better ones. We’re on course to design beings who will supersede us. Hoist by our own petard!

3 Reasons You Can Win Anyway

Man is a creature who makes pictures of himself and then comes to resemble the picture. – Iris Murdock

1. Our notion of selfhood is misconceived. Autonomous, independent beings we’re not. Selfhood is anything but self-sufficient. No self can stand alone. Our existence is not independent of everyone else’s. On the contrary, without others, selves are stillborn. To exist is to co-exist. We are all each other.

Instead of identifying as a separate self — a stand-alone, mortal creature of limited vision–identify as a “superself” — a being for whom existence is co-existence. Super selves are whole sighted and non-partisan. They do not take sides, they explain. As an interdependent super self, you contain multitudes. The multitudinous superself is extended in space and time and so it is as connected and robust as singular selves are insular and vulnerable.

2. “The successful man adapts himself to the world, the loser persists in trying to adapt the world to himself. Therefore all progress depends on the loser.”

How, then, could losing ever be equated with failure? As every win is tainted by fear of losing the next round, so every loss is mitigated by lessons learned in defeat. Winning and losing are not antithetical; they’re partners in the quest. As Don Quixote abandoned his quest, his faithful squire Sancho Panza took it up. One man’s loss became everyman’s win.

3. We can as well program intelligent machines to incorporate the better angels of our nature as to reproduce our pathologies and pursue our depredations. We need not design our successors for senescence and death, but can instead make them eternally self-renewing.

The Question: Will the partnership between Man and Machine end in our demise, or is this the beginning of a beautiful friendship?

I explore this topic in depth in my book Genomes, Menomes, Wenomes: Neuroscience and Human Dignity, currently the top ranked book in neuropsychology in Amazon’s free Kindle Store.